Bud is seen eating at a clam bake with Nora that the Bakers are invited to. He most likely got a job promotion due to always having a positive attitude or for being responsible at work. Bud wants to work part time after Nora gives birth so that he can be there for his wife and their unborn baby. When Nora she goes into labor, Bud is a nervous wreck. At the hospital, Bud tries to calm his wife and then he snaps at a doctor at the front desk. He is relaxed after the birth of his son.

Bud is portrayed in the film by Jonathan Bennett. 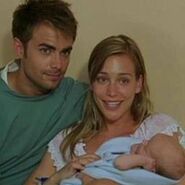 He was with his wife Nora and his new son Tom McNulty.

He leave Lake Winnetka with his wife Nora and his son Tom.
Add a photo to this gallery
Retrieved from "https://cheapbythedozen.fandom.com/wiki/Bud_McNulty?oldid=5201"
Community content is available under CC-BY-SA unless otherwise noted.